The Apprentices who came in at 8:30am this morning were a great help and learned how to make newspaper stixx that will be used during Friday’s engineering challenges. They did this by rolling up sheets of newspaper, coating in it the special goo and then rolling it progressively harder in the Stixx machine to achieve a solid stick that can be used to build strong structures.

When everyone else arrived by 10am we headed to the bus stop to catch the number 45, which would take us all the way to the museum. Unfortunately it was only a single decker bus (which MAKE Summer School ended up taking over!) and due to a lack of seats, the teachers rode most of the way standing up!

Once at the National Museum of Scotland the Apprentices enjoyed all of the interactive activitities, with the F1 racing car simulator being the most popular.

Other popular activities were the rope pull, where you had to pull your own weight using differing numbers of pulleys (we learned that the more pulleys were used the easier it was to pull yourself up) and the robot that would spell out your name (pictured above spelling MAKE). 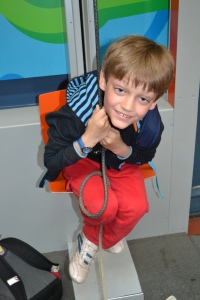 The space and wildlife exhibitions were also very popular and one apprentice learned that they were the equivalent weight to a chimpanzee, which was quite apt! ;OP 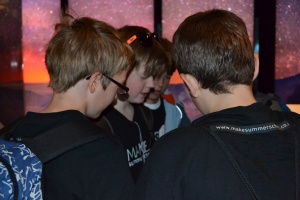 We had lunch downstairs in the museum before taking the bus back to the workshop at Merchiston, where the Apprentices began work on their Jacob’s Ladder toys.

Sanding was the first job (the Apprentices are pretty good at this now after the first two days!) and then it was on to painting. The teachers did a recap on how to paint and how less could be more!

While the paint dried work continued on the Treasure boxes for some and they were either painted or waxed.

What has been most impressive from the teacher’s perspective is how well the Apprentices have got on with each other and how they have all just got stuck in and mixed with each other. 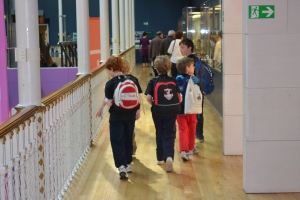 I feel that peer learning is one the best ways to attain skill and understanding, and with the confidence really growing in the youngsters it is great to see them wanting to help each other out. I often use it as a teaching technique in its own right and my pupils always respond positively to it and have fed back to me that they really enjoy teaching each other and being taught by one another. If you teach something that you have just learned you are 90% more liklely to retain the knowledge/skill, so for us it just makes sense!

With the paint dry on most of the Jacob’s Ladder toys the Apprentices learned how to assemble them; quite a tricky business to start with but after the first one it becomes quite easy.

Tomorrow we will be making elastic band crossbows; which proved very popular when we carried out our project research! So it’s onwards and upwards to the penultimate day of MAKE Summer School.

2 thoughts on “Friends and Ladders!”